Sparoza: What the garden is (and isn't)

Photographs to illustrate the article published in The Mediterranean Garden No. 100, April 2020

Caroline Harbourie writes: I first visited Sparoza long before the MGS was dreamt of, even before Sally Razelou arrived there. This was in 1984, in the year following Jaqueline Tyrwhitt’s death, when Stephen Grigg, her last gardener, was still in residence. When she created the garden Jaqueline Tyrhitt was very much a pioneer in the use of native plants, and an early recogniser too that the mediterranean garden year begins in autumn with the first rains, rather than in spring.  Over the years since that day I have watched the garden of Sparoza develop. In this 100th issue of TMG I’d like to consider just what sort of garden it is. 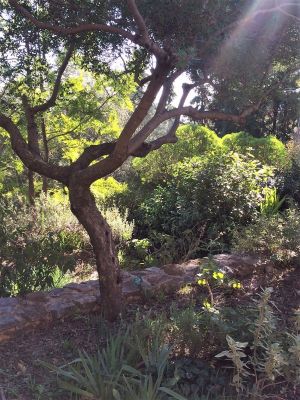 To start with, it is a garden made on poor, stony, alkaline soil, in places very shallow. Its climate is typically mediterranean, with hot, dry summers (up to 40 C or more) and wet (usually) winters. In addition it is swept by a strong, drying, northerly wind in summer, the meltemi. It doesn’t really make much sense to give a figure for average annual rainfall since there is a very great variation from year to year in both the amount of rain and its month-by-month distribution; however, a very approximate figure might be about 450mm, but this of course is averaging out both the wet years and the dry years. Give or take a few local variations, these are the conditions typically faced by gardeners all over the mediterranean world. And they are thus of course what make Sparoza so perfectly suited to be the garden of a Society concerned with mediterranean gardening. 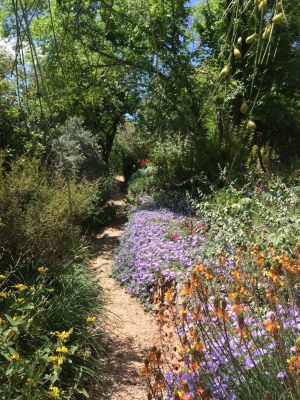 Terraces in May: Bulbine frutescens 'Hallmark', Convolvulus sabatius and Salvia discolor on one side of the path, Phlomis russeliana on the other, with the fruits of Lygos raetam in the upper right-hand corner

Trying out plants: experimental work at Sparoza garden. Species that look as if they might be suitable are planted, whereupon, as any gardener might expect, some live and some promptly die. Of the plants that survive, those that appear to be flourishing rather than merely miserably hanging on are propagated in Sparoza’s nursery and tried out in other positions. Position is all-important; experimentation is complemented by close observation. Sally Razelou has noted, for example, that in years of extreme drought the neighbouring presence of a tree providing shade for part of the day can make the difference between life and death for stalwart plants that are normally drought-tolerant, such as old rosemaries in the unwatered planting around the ‘threshing floor’. An unwatered plant may benefit from ‘borrowed water’, namely a slight increase in soil moisture resulting from the watering of a nearby plant. 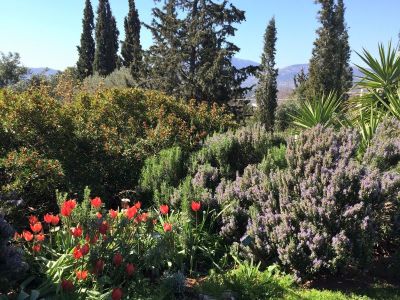 Tulipa undulatifolia and Rosmarinus officinalis beside the 'threshing floor' in March

Ideally, anyone interested in the Sparoza garden should visit it at different seasons. In May it is full of flowers while in October it is often at its driest following the normal drought of summer. Two things to notice in October: the dried seed heads on various plants and, in places, the bare earth. Many mediterranean plants have striking architectural forms when dry and/or very decorative seed heads (for example the large, spherical papery seed heads of Lomelosia minoana which remain on the plant all summer long, and the straw-coloured ‘daisies’ of Phagnalon rupestre). Cleared, dry, bare earth is something that seems to shock many people, yet, if one thinks about it, it is an integral part of the rhythm of a mediterranean garden – the resting period in summer. Then too when their flowering season is over the aromatic foliage of so many mediterranean plants gives another dimension to the garden – and bare earth adds scents of its own: the wonderful subtle smell as it cools down at nightfall after a hot, hot day and of course the delicious petrichor or fragrance of thirsty earth drinking when the first rains fall. 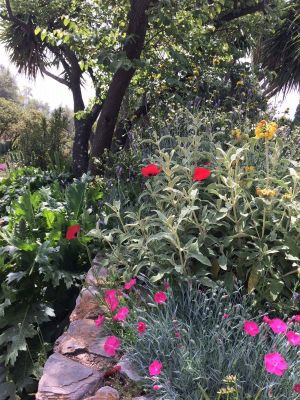 A Dianthus species, Phlomis fruticosa and Papaver rhoeas in the bed surrounding the 'threshing floor' with the beginning of the phrygana area in the background in April

The resting period in summer is when many mediterranean plants become dormant and lose all their leaves. These bare plants don’t represent a failure on the part of the gardener but rather his or her respect for the plants’ natural cycles. Among such plants at Sparoza are Euphorbia dendroides (the tree euphorbia), Euphorbia acanthothamnos (the Greek spiny spurge) and the pink-flowered Cretan endemic Ebenus cretica (see photo at the top of this page). It is not just that these plants can survive without water in summer, it is that they don’t want it; if you water Ebenus cretica, for example, or the tree euphorbia in summer you will quite simply kill them pretty quickly. While they are asleep and leafless one can enjoy their bare shapes. The two euphorbias, E. dendroides and E. acanthothamnos, are particularly visually interesting: the former with its regularly-branched silhouette and the latter with an even dome of intricately interlaced and geometric thorns. Then when at last the first rains arrive they suddenly and swiftly green up again. 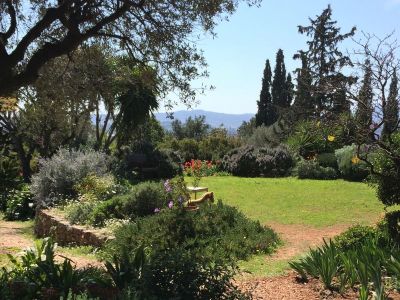 A view of the 'threshing floor' with Mount Hymettus in the background in March. In summer it becomes a quiet surface of bare earth until it greens up again with the autumn rains

There are other plants whose strategy for getting through the dry summer is not complete dormancy and total defoliation but rather a dramatic shrinking of their leaves to minimise water loss through evapotranspiration. Ptilostemon chamaepeuce which in spring forms such glorious mounds with pinky-mauve thistle-like flowers, beside the ‘threshing floor’ for instance, is one such plant. Others in the terraces at Sparoza are the silvery Anthyllis barba-jovis and Artemisia californica (the California sagebrush). 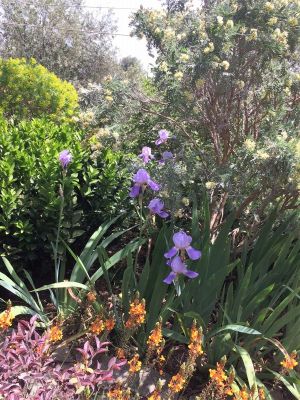 Bulbous species avoid the summer heat and drought by retreating underground. Anyone visiting Sparoza only during the dry period might thus not suspect the richness of its collection of geophytes in the phrygana area, on the hillside and scattered throughout the garden. Indeed, these days a greater variety of geophytes is seen at Sparoza than in the surrounding Attica landscape. Among the first to appear are the sea squill, Drimia maritima, with its stately tall spire of white flowers (even before the first rain – apparently its trigger is the shortening of the days) and the ever-spreading little pink Cyclamen graecum. 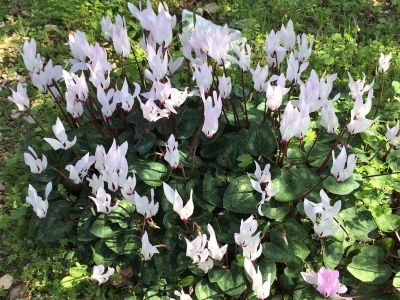 Cyclamen persicum on the path to the phrygana area in March

In the phrygana area too at different seasons are Amaryllis belladonna, Iris × germanica (mostly purple) and the greeny-brown widow iris, Iris tuberosa (formerly known by the much more evocative name Hermodactylus tuberosus). Narcissus obsoletus is also found here, as well as on the hillside and in other parts of the garden; the height of its flowering stems depends on the dryness of the season – in very dry autumns it is tiny. Narcissus papyraceus also thrives in winter or early spring and spreads its fragrance everywhere in the garden, including in the phrygana area. Sternbergias stand out in autumn with their bright yellow crocus-like flowers, both Sternbergia lutea and S. sicula. 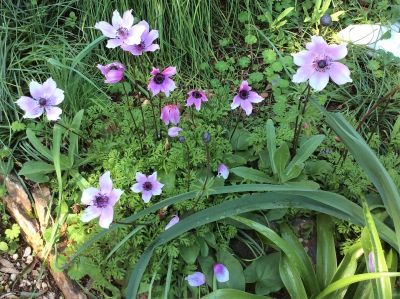 Later on comes Anemone coronaria, flowering profusely in shades of pink and mauve, so characteristic of Sparoza and unmissable as one approaches on the road that curves round the phrygana area. Little clumps of the autumn squill, Prospero autumnale, and grape hyacinths, both Muscari neglectum and the tasselled Leopoldia comosa, pop up here and there, while Ornithogalum umbellatum self-seeds freely. The lovely mauve Crocus goulimyi, one of the many bulbs in the phrygana area, is also to be seen in Derek’s Garden, as is C. cartwrightianus; the latter can be found too on the hillside where it likes to spread into the paths. 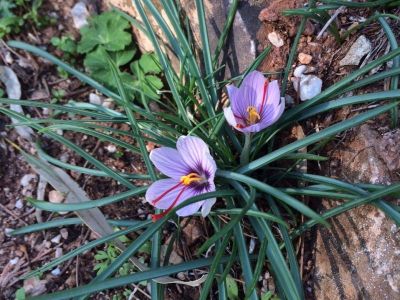 Naturally, when we visit gardens we all bring with us our preconceptions of how a garden should be. It would be easy to say when faced with the parched Sparoza ground in October “Give it some water, for heaven’s sake, to make it look better”. But this would be to go against the core principle of Sparoza. It is a garden managed in such a way as to be in keeping with its Attica climate and to respect the requirements of the many mediterranean plants cultivated here, including the need of some for summer dormancy. It is not a garden that remains green and lush throughout the summer.

It would also be easy to say, “If the soil is so poor, improve it, bring in new topsoil”. This too would be to misunderstand the requirements of the kinds of plants grown at Sparoza. So many of the plants we grow in mediterranean gardens and see at Sparoza, such as lavenders, cistuses, rosemaries, origanums, teucriums and so much else, have evolved to thrive on poor stony soils. This is where they feel at home; they do not want manure and fertilisers and rich soil, which shorten their lives drastically. All they demand of us is perfect drainage. 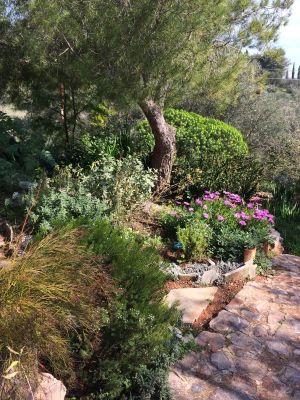 Russelia equisetiformis, Osteospermum ecklonis and Euphorbia dendroides beside the path leading to the pools in January

Jaqueline Tyrwhitt wrote of the tough conditions of Sparoza that any plant which survived here would be likely to do even better elsewhere. I hope in this article I have managed to convey something of the principles and practices of Sparoza and how they exemplify at the same time both the frugality and the magnificent prodigality of a truly Mediterranean garden.