Photographs to illustrate the article published in The Mediterranean Garden No. 103, January 2021

For the past fifteen years, an ambitious botanical project has been taking shape in an old wine estate in the Gard region of southern France. The owner of Château Pérouse, Jan-Willem Vos writes:

The botanical garden already hosts four CCVS-labelled collections (Conservatoire des Collections Végétales Spécialisés), but its originality is mainly due to the landscape treatment of this vast project, intended to provide the maximum of microbiota favourable to the acclimatisation of plants from all mediterranean-climate regions of the planet – a sort of open-air biodome.

The park is located on the Plateau des Costières. It is the first landform to encounter the southerly winds arriving from the Mediterranean and it marks the border of the Camargue. Emerging on the horizon are to the north the foothills of the Cévennes, to the east the Alpilles, to the west the Pic Saint Loup and to the south a view over the Camargue and Petite Camargue. These protected sites are known worldwide for their strategic positions on the route of migratory birds. The climate and the landscapes are a delicious blend of Provence and Languedoc, Cévennes and the seaside. 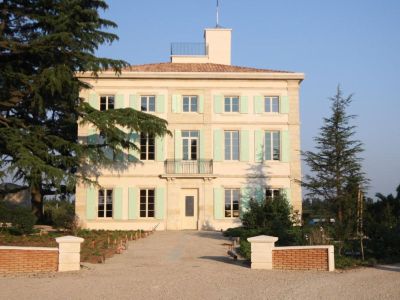 Before becoming a botanical garden the property belonged to apricot farmers for fifty years. The new owner, who is passionate about history, botany and architecture, immediately saw the potential of the place.

On the outskirts of the Château are magnificent cedars, more than a hundred years old, as well as other remarkable large trees planted in groups, as was common in the 19th century. The enhancement of the site is based on the endemic species of the region; it is extended by the creation of large areas referring to different parts of the world where a mediterranean climate allows a multitude of plants to flourish. On its 15 acres, the park deploys an original plant palette which allows visitors to move from the South of France to other countries with a similar mediterranean climate, such as Australia, South Africa, Central Chile and California. 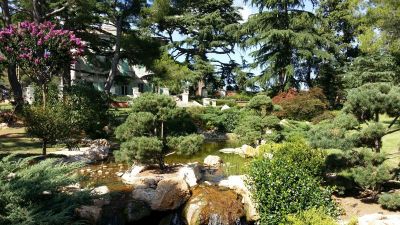 Near the chateau: the river garden amid the cedars

The plants installed in the botanical garden all come from areas with a mediterranean-type climate, which is mainly characterised by hot and dry summers as well as mild and humid winters. However, many microclimates exist within these areas, and plants are very sensitive to them. To understand these needs better, we rely on visits to the regions concerned and on bibliographical research which provides valuable information. We recreate all these microclimates in test gardens and then observe the reaction of the plants.

To facilitate the acclimatisation of plants, a suitable landscape first needs to be created through, for example, the use of rocks, earth formations and the creation of artificial rivers. Compatible plant associations must then be formed, in particular by installing undergrowth plants beneath trees. In addition, as the soils vary in the different biotopes of origin, it is necessary to compose substrates which imitate them as closely as possible. Similarly, the quantity (frequency and intensity) and quality (pH control) of the irrigation needs to be adapted to the plants’ needs. 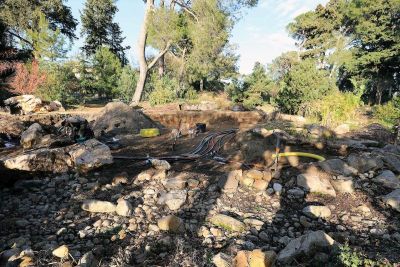 Re-constructing the border next to the river in February 2019

Sometimes more specific methods such as misting will be used to recreate the high humidity that is suitable for certain plants. These atmospheres and microclimates are tested for temperature, humidity, wind speed and solar radiation. Plant health is assessed by monitoring, by human observation and by measuring their chlorophyll content using a chlorophyll meter (SPAD502+ Konica Minolta) that does not damage the leaves. 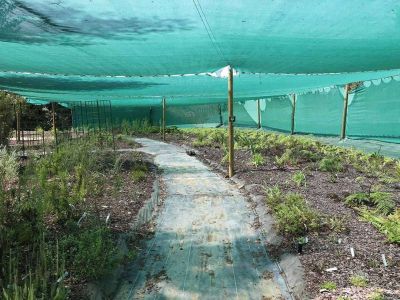 Fern nursery with a controlled shaded, high-humidity environment in the Australian test garden in August

In addition, the amount of water used for irrigation will be measured in order to adjust it as accurately as possible. The layout designs are very meticulous and we are using our own software. In these designs coloured circles help to recognise the distribution of taxa, themselves designated by a number from the database. Attached to each number is all the necessary information to place each taxon in the drawing, including its size at the time of planting and also after 5, 10, 20 and 50 years. If we change the database content, the drawing will automatically change. The final goal is to provide a ‘natural’ landscape while mastering its development.

Once the landscape has been modelled and the locations specified, it is time to focus on the plants. We work with specialist nurseries and seed suppliers, but despite this we remain vigilant about the veracity of the identification. On receipt of the plants, the taxa all get a label that they will keep for as long as they stay in the nursery. At the first flowering of a taxon we take pictures and check the accuracy of the identification. These photos are then integrated into the database and provide confirmation of the plant’s identity. 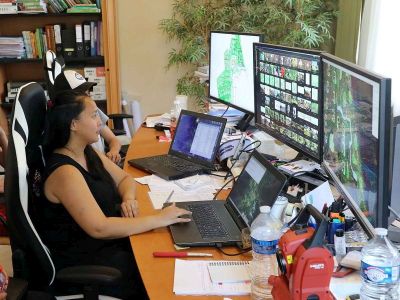 In the gardens the taxa are geo-localized with a geometrical system (Total-Station Hilti, centimeter accuracy). Thus we manage to merge the real and the virtual. With the help of a smartphone or a tablet connected to the website, the visitor can walk around to access the designs of the garden, zoom in and then click to obtain the document attached to each taxon. This information is much more complete than on a conventional label and is available in three languages. It can be found on the online database of the Château Pérouse website or by clicking on the plants in the Google Map object.

Good acclimatisation begins from the moment of sowing. Once the seeds have been obtained from specialists from all over the world, some of them are entrusted to specialist nurseries such as the nurseries Arven, Issa, Railhet and Le Monde des Fougères. These seeds are germinated in their greenhouses. Nevertheless, the large majority of the seeds are sown by us in our own greenhouses or in our growing chamber (3,500 taxa per year from 2018 onwards). We adapt the growing medium to the soil composition of the landscape in order to create continuity for the plants when they are planted out. As soon as the plants are resistant enough, they pass into acclimatisation greenhouses where they grow on further, after which they are planted in test gardens. 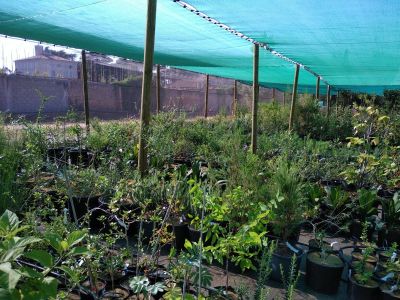 Young plants in the nursery in July

Some of the most sensitive plants are cultivated on the terrace in order for us to keep a close eye on them and respond immediately to their needs. Situated behind the Château, the nursery was established in 2005. Some plants are not transplantable and are therefore maintained in containers until they are planted permanently. We thus grow eucalypts, proteas, restios and many acacias in Airpot®, which helps the development of a mass of healthy fibrous roots. 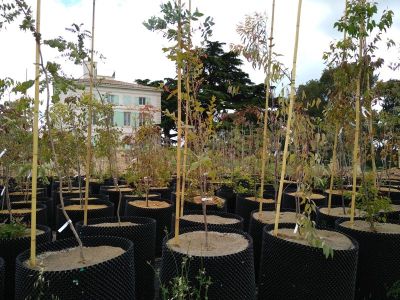 Eucalyptus in Airpot after repotting in June

From 2009 onwards we created four test gardens forming the visitable part of the botanical gardens today.

The first one was dedicated to discovering all the plants we could maintain in the garden. We acquired a lot of information about the possibilities for some plants as well as the knowhow we needed in order to create better conditions for many others. One of the major elements was a good soil mixture since on site we have red clay. We tried adding a lot of sand and small pebbles, but to no avail. Of the two thousand taxa tested, only 287 remain in this garden today. Many of the surviving plants have been transplanted over the years since this garden was planted densely in order to test the largest number of plants possible. 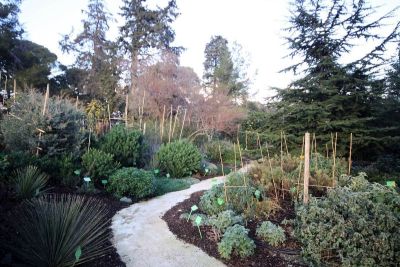 The second test garden was developed for Australian plants. In this garden we have tested new substrates with very good drainage. The benefits were apparent straight away. The soils are much more like Australian soils and even the plants’ frost hardiness has improved vastly since there is no waterlogging. This garden is set up as a nursery as well so we can transplant using a bulldozer. This may sound strange but the substrates of this garden consist to a great extent of sand, so we take several cubic metres of substrate and place the plants in new holes made in advance. 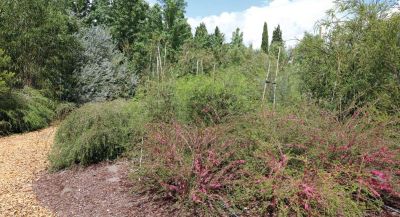 The third test garden was developed for low chaparral/ garrigue-type biomes of the four continents. In this garden we used a different substrate with 60% of pozzolano. After two years the results are as good as those of the first garden with the possibility of a better coherence of the soil when replanting. We are testing more and more plant communities here. 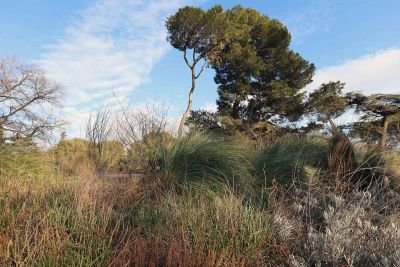 A view of the chaparral garden in February

Parts of the river garden have been turned into a South African grassland as well as testing for understory plants from South African forests. Here we see research into substrates and plant communities coming together with the work we are doing on geophytes and succulents. In the coming years we shall be improving this part until we have a landscape with grasses and flowers the whole year round.

Our next steps
We shall need another four years of cultivation and the creation of 25 acres of test gardens before we are able to start planting the first phase of the ultimate botanical gardens. The next test garden will have as its objective the creation of all the microclimates for the project. This garden will be part of the botanical garden and will remain a test garden and nursery. The advantage of having microclimates of known quality is that it helps us to assess the best acclimatisation for each taxon while also assessing the invasiveness of each taxon.

For more information you can visit our website at chateau-perouse.com where you will also find our extensive database (more than 18,000 taxa, also in English). The database is used by our own botanists and provides general information from our library. It provides links to an html-page per taxon including the germination information, the history of our experience with the taxon and little by little other information and photographs.

Jan Willem Vos, owner of Château Pérouse, has generously donated a selection of 500 species the MGS Seed Exchange. Here is the list of these seeds that you may order from Chantal Guiraud.