Plant hunting on Samos: birthplace of the queen of the gods

Photographs to illustrate the article published in The Mediterranean Garden No. 105, July 2021

Lucinda Willan joined Lefteris Dariotis as assistant on a plant hunting trip to Samos in June. Lefteris is a gardener, plantsman and botanist for a programme of plant and seed collecting for the Institute of Plant Breeding and Genetic Resources of the Hellenic Agricultural Organization Demeter.

Lucinda writes: The birthplace of the goddess Hera, of Pythagoras and of the philosopher Epicurus, Samos is the most easterly of the islands of the East Aegean being just a mile from the Turkish coast. It has a rich flora of over 1,500 plant species and many endemics, including some of Greece’s rarest plants which we were hoping to find during the course of the next three days. 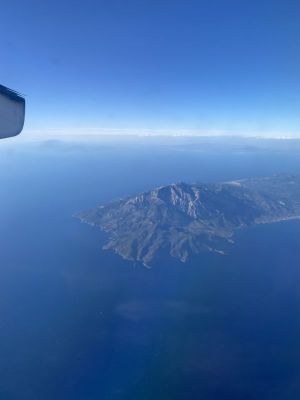 The contrast with the hot, parched Attica landscape we had left behind was extraordinary. Our 45-minute flight from Athens had wound back the clocks to spring. The scent of Helichrysum italicum hung in the air as we made our way across the rainwashed concourse to the small terminal building and we decided it must just be petrichor, the scent released by rain on hot earth.

Our first stop was Vathi, on the northern coast of the island, on our way to explore the first mountain, Mt Karbouni. The twisting mountain roads took us through pine forests and olive groves opening up to spectacular views and the hummock-shaped plants of the phrygana. The verges were a riot of the citric yellows of Euphorbia acanthothamnos, Spanish Broom and verbascums studded with the pink of wild hollyhocks, Alcea pallida, and the paintbrushes of Trifolium purpureum. We stopped to admire the views and to collect the large inflated paper seedheads of Muscari macrocarpum and seeds of the endemic Centaurea acicularis. 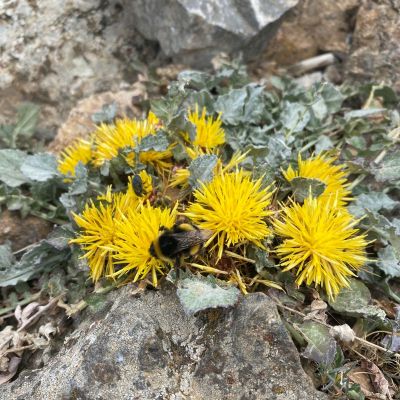 It was 4.30 p.m. when we started to climb the mountain and I got my first taste of Lefteris’s experienced and incredibly sharp eye spotting Teucrium kotschyanum, in the shade of a fig tree, as we climbed a steep ramp at speed. 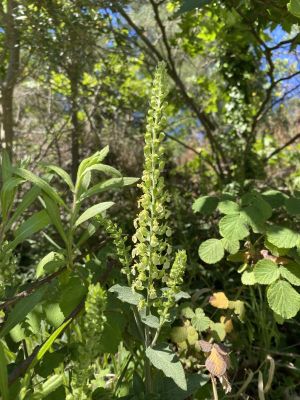 The mountain road was rutted but not difficult and the landscape soon started to spread out around us as we gained altitude; the panoramic views were ornamented with rivers of the bright yellow Spartium junceum, Spanish Broom, whose honeyed perfume wafted through the car. 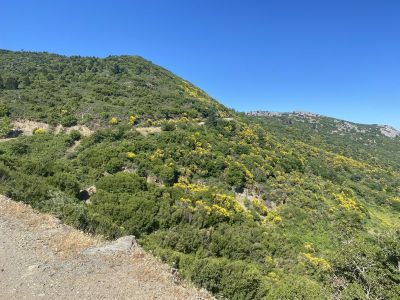 There were thymes, campanula and Anacamptis sancta on the edges of the road. When we hit the level of the black pines, Pinus nigra, the plants changed noticeably too and a carpet of cornflowers, Centaurea segetum (syn. C. cyanus), ran through the shade of the trees. We stopped the car to explore and were rewarded with a wonderful selection of plants as we climbed the scree. Here was Phlomis grandiflora nestled about with Scutellaria orientalis subsp. pinnatifida, Nepeta italica subsp. italica, Dianthus elegans, Vincetoxicum canescens subsp. pedunculatum, Silene urvillei and Acantholimon ulicinum dotted about with the striped seedheads of fritillaries. 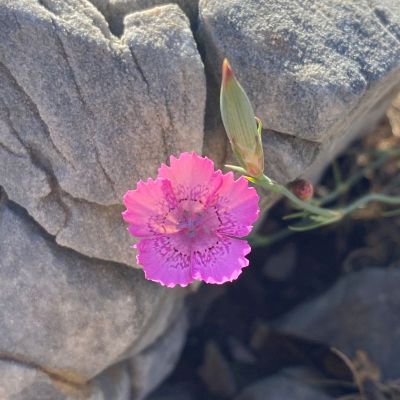 We returned to the car and drove up to near the summit, leaving the trees behind. This was a lunar landscape of rocks and hummocks, low-growing spiny plants hugging the scree and evidence from leaves and seedheads that it was rich in geophytes too. We climbed up to the church at the summit of Profitis Elias (1153 metres), exclaiming as we went over Thymus samius, Thymus sipyleus, Asperula samia, Sideritis sipylea, Pterocephalus pinardii, Centaurea cariensis subsp. maculiceps, Allium sphaerocephalon subsp. trachypus and Sternbergia clusiana. (See the photo here.) The way the plants had placed themselves moulding to the rocks or sheltered amongst goat-pruned Quercus coccifera and Prunus prostrata was wonderful to see but the best was yet to come.

As we turned from the church towards Mt Kerkis we saw mounds of exquisite bright pink flowers arranged across the hillside with the layers of blue mountains behind. This is what we had come to see, Atraphaxis billardieri, and it is a sight that I shall never forget. (See the photo at the top of this page) We returned to the hotel two very happy and tired plant nuts.

It was with more than a little trepidation that we set out at 7 a.m. on the second morning to start climbing Mt Kerkis, the highest peak on the island at 1,434 metres. As we drove closer it seemed to loom vast across the horizon, all jagged vertical cliff faces and scree. The narrow road took us up the lower reaches of the mountain with precarious strip terraces of olives covered with wildflowers on either side until we got to about 400 metres where we parked the car and continued on foot. Our goal was to find the endangered larkspur, Consolida samia, which makes its home in the scree of Mt Kerkis at between 600-800 metres. 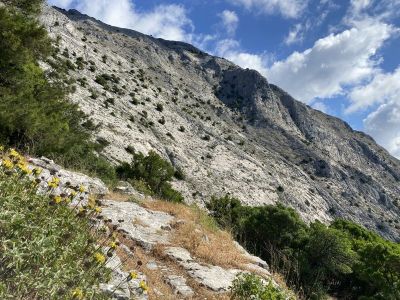 Emerging on to the scree of Mt Kerkis

We were looking for a 4cm-high blue needle in a vast scree haystack. It was only when we were halfway up that Lefteris told me no one has seen it since the 1960s. We wound our way up following an old stone path until we reached the picturesque convent of the Evangelistria with breathtaking views over the south of the island. 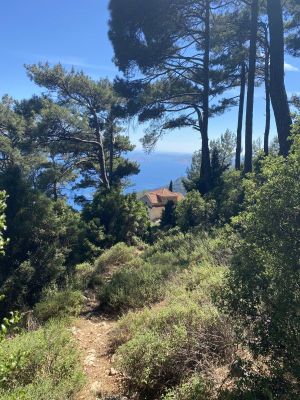 The convent seen through the trees

We continued a steep climb through pine woodland covered with Cistus creticus until we emerged from the treeline and saw the scale and vastness of the scree slopes in front of us. Dotted with stands of Phlomis grandiflora, the palette of plants was similar to those we had seen on Karbouni but in a very different setting and configuration. Keeping an eye on altitude and with our eyes trained on the ground we slid about in the steep scree looking for any fleck of blue. Here there were beautiful clumps of Helichrysum orientale growing out of the green-yellow lichen-covered rocks and flashes of pink from Dianthus elegans but sadly no Consolida. 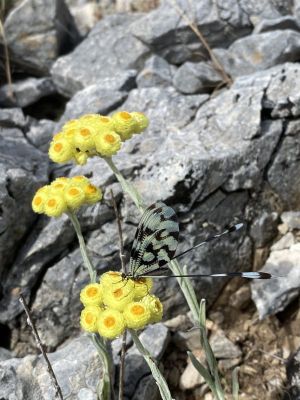 At around 1000 metres we stopped at a rocky outcrop for a break and were excited to discover another colony of Atraphaxis billardieri clinging to the plunging rock face. We slotted ourselves into the undulations in the rock and marvelled at the view in front. It was not long after our break that the plants changed into dramatic green and silver waves of spiny hummocks interspersed with zingy Smyrnium perfoliatum, Ballota pseudodictamnus and Euphorbia rigida. 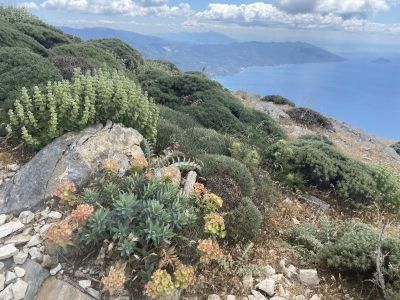 These hummocks were a mix of wind- and goat-pruned Quercus coccifera, Juniperus foetidissima, Astragalus cretica, Acantholimon ulicinum and Centaurea spinosa subsp. tragacanthoides that were placed so perfectly in such undulating clipped forms that to me it looked like the work of a high-end designer with a penchant for cloud pruning. 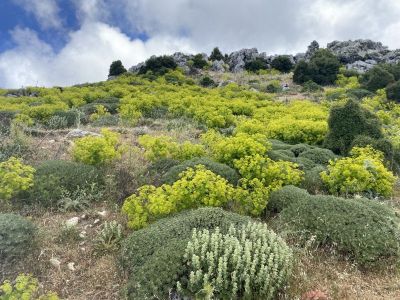 Every few metres or so a low-growing species rose, possibly Rosa pulverulenta, would appear through the mounds. 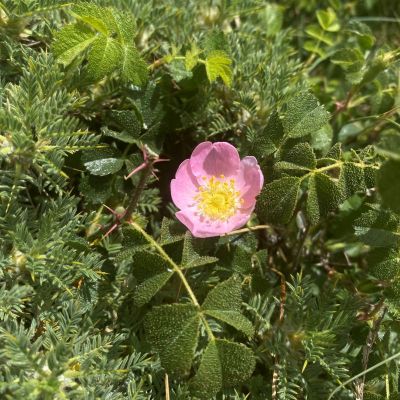 We continued up to about 1,200 metres when we stopped to have a drink and let the first people we had encountered pass us. As we put down our rucksack we realised we’d accidentally stumbled into rich pickings in the form of Jurinea cadmea and the unreal Paracaryum aucheri. 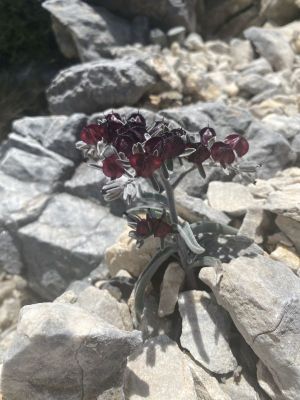 On the third morning we retraced our route up the mountain from the first day, with a target this time to find Dactylorhiza pythagorae, one of Greece’s rarest orchids that is found only in the damp stream beds at localised spots on Samos. At the fork near the top of the mountain instead of heading up we took the low road which led us deep into the pine forest. I had a pang of excitement as the landscape changed and it felt as if we were entering orchid territory. We wound our way along the narrow rutted roads that teetered on the edge of the steep wooded slopes and eventually after descending for about half an hour came to our destination, a damp stream at the bottom of the valley. 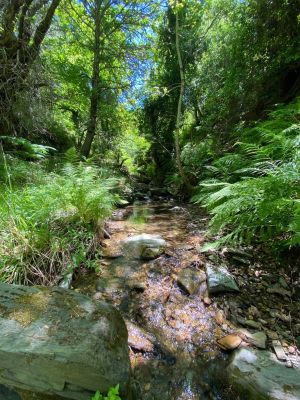 The road was hung about with Rosa sempervirens and garlanded with Lathyrus grandiflorus, the first time I had encountered this spectacular plant in the wild. The sides of the bank were smothered in another pea, Lathyrus laxiflorus and Datisca cannabina. We left the car and started to pick our way along the side of the stream. We were accompanied by electric blue clusters of Beautiful Demoiselles and it wasn’t long before we found our first orchidaceae. 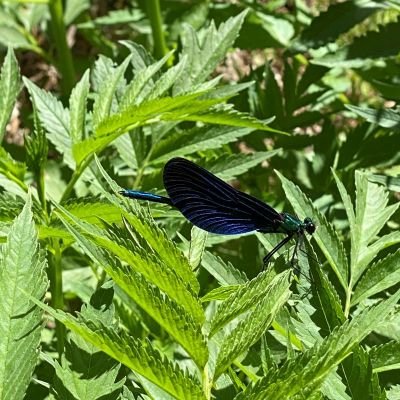 Within a few minutes we saw Cephalanthera rubra (red helleborine) and Neottia ovata (common twayblade) partially obscured amongst the grasses and verdant vegetation of the damp river bank. After less than ten minutes of walking I spotted something I didn’t recognise on the far bank. I turned to Lefteris and asked him what the bulb on the other side of the river was. ‘That’s what we’re looking for!’ he replied. Dactylorhiza pythagorae is one of Greece’s rarest orchids found only on Samos. It is named after the great mathematician who was born on the island. The slender statuesque orchid was standing at around 40cm almost disguised amongst the broad-leafed grasses and Carex pendula. 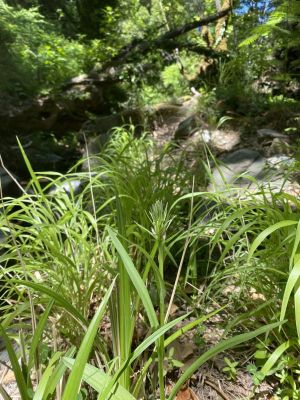 We continued on and found Dactylorhiza pythagorae spotted sporadically along the flat sections of wet bank on either side. As the bank rose up the grasses gave way to ivy and ferns and mossy veteran Platanus orientalis and Castanea sativa that reached out for each other across the stream. Sequestered in this shady green tunnel of plants and water you couldn’t help but feel the vulnerability of these orchids. If wildfires swept across the mountain, like they did in 2000, and came down this valley, their habitat would be lost.

The drive back up through the mountain required multiple stops for cuttings and seed collection before we headed to the beach for a late lunch at Pythagoreio. A more idyllic spot you could not imagine. The moussaka and wine were devoured at speed before a short journey to the airport and home to Athens. An island of the gods indeed.