The photo at the top of this page shows Sparoza hill phrygana in summer dormancy, August 2021 (Photo Lucinda Willan)

Caroline Harbouri writes: Over thousands of years plants that are native to regions with summer-dry climates have evolved methods of surviving several months of great heat and drought. Since plants lose water through their leaves by evapotranspiration, a lot of these adaptations to drought involve leaves. Many mediterranean-climate plants have sclerophyllous, i.e. tough and leathery, leaves. Others, such as rosemary, have very narrow leaves, while yet others, for example Phlomis species, hold their leaves vertically in summer – in both cases to reduce the surface exposed to the sun. And of course a great many protect their leaves with minute hairs, giving all the lovely greys and silvers so characteristic of mediterranean gardens.

But what I want to consider here are the plants that go a step further and simply lose all their leaves in summer.

Those who live in temperate climates take it for granted that winter is the dormant season. In the Mediterranean, by contrast, winter is a season of burgeoning growth when many plants flower. It is not winter but the height of summer that is the dormant time of year, the resting period for plants. A great many Mediterranean trees are in any case evergreen: cypresses, pines, olives, carobs, holm oaks and bay trees for example. Those born and bred around the Mediterranean are as familiar with the sight of bare shrubs in summer as northerners are with bare trees in winter. So let me look at some of these plants in Greece. 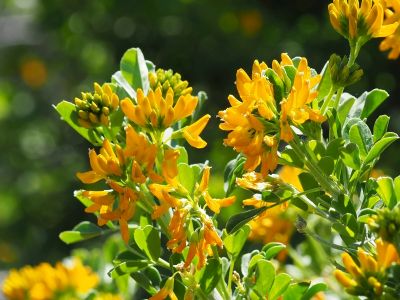 Medicago arborea, the tree medick
Unlike other plants that lose their leaves when they enter summer dormancy, Medicago arborea will suffer no ill effects if given water in summer, in which case it will remain fully clad in foliage. But as many areas around the Mediterranean struggle with exceptionally low rainfall, gardeners seeking to conserve water might well wonder: why irrigate a plant that doesn’t need it? Left to its own devices, M. arborea rapidly greens up again after the first autumn rain. A member of the Fabaceae family, M. arborea has clover-like leaves, chrome-yellow flowers and distinctive coiled seedheads. 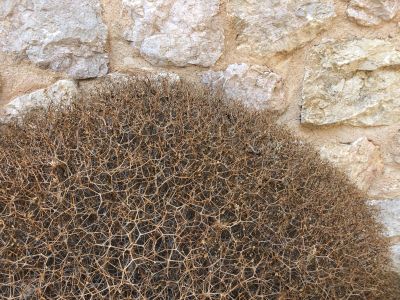 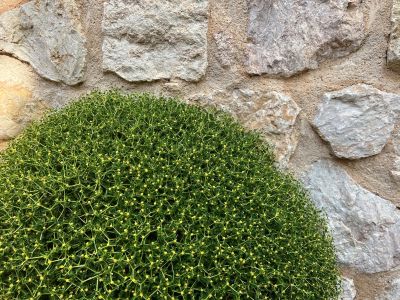 From autumn to spring this spurge is clothed in small leaves of a brilliant emerald green, after which its colour turns into a clear yellow when it is covered in flowers. Although E. acanthothamnos is native to Attica it is not native to the Sparoza hillside. It was Jaqueline Tyrwhitt who introduced it into the garden, where it remains to this day. This is one of the drought-deciduous plants whose architectural or sculptural form in summer makes them attractive throughout the year in a waterwise Mediterranean garden. It will not survive being watered in summer. 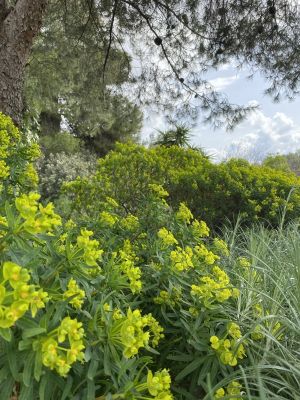 Euphorbia dendroides, the tree spurge
This plant was also introduced into the garden of Sparoza by Jaqueline Tyrwhitt and several specimens grow beside the ‘threshing floor’. Unfortunately, as Lucie Willan reports in TMG 108, some of them were snapped by the heavy snowfall of March 2022. This euphorbia is found widely from the western to the eastern Mediterranean. It cannot withstand frosts of any severity or length and is usually seen near the coast, on rocky cliffs or headlands. 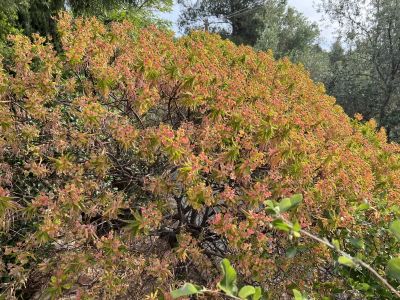 The regularly branching skeleton of E. dendroides is very architectural and decorative in summer when it is bare. After the first autumn rains it puts out bright green leaves at the end of its branches; these are followed in late winter or early spring by lime-green inflorescences. After flowering the bracts persist and turn orange, adding yet further visual interest. This is a stately plant growing to one and a half metres or more in height. It will die if watered in summer. 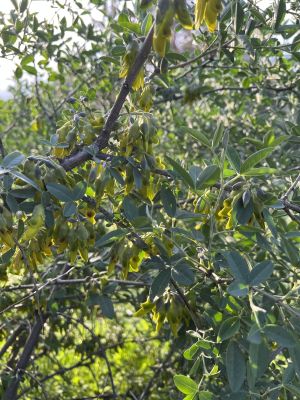 Anagyris foetida, the stinking bean trefoil
This member of the Fabaceae family is much undervalued. Perhaps people are put off by its foetida/stinking name – but rest assured, it doesn’t stink unless you crush its leaves. It may reach the size of a small tree, about three metres or more. Its tripartite leaves are blueish-green and slightly downy. Its axillary racemes of flowers are yellow, with the standard, shorter than the corolla, blotched with brown. There is to my mind something very attractive about this combination of yellow and brown – think of Cerinthe major. I hope that one day A. foetida will be more widely grown in Mediterranean gardens. 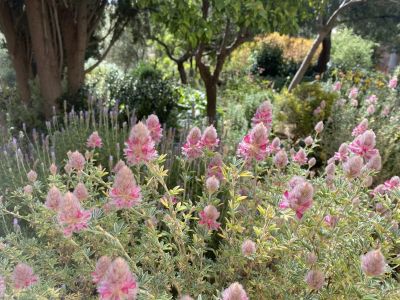 Ebenus cretica, Cretan ebony
This Cretan endemic is another drought-deciduous shrub that will promptly die if given summer water. It is a lovely plant. Its composite downy leaves, giving it a somewhat grey appearance, are complemented in spring by pink, conical clover-like flowers covered in long silky silvery hairs. On Cretan hillsides in summer, when the plant has lost its leaves the dry, reddish-brown flower heads remain for a long time, giving it a surprisingly rusty look. It is not always easy to propagate but seedlings that appear around the parent plant may be transplanted. Jaqueline Tyrwhitt first planted E. cretica at Sparoza in what is now called ‘the dry bed’.

There are plants that don’t quite go the whole way; they are dormant in summer and survive without water yet do not entirely shed their leaves. I think of three in particular at Sparoza: Ptilostemon chamaepeuce, Artemisia californica and, my favourite, Anthyllis barba-jovis.

Ptilostemon chamaepeuce has narrow leaves to begin with. During the hot, dry summer they shrink, becoming even narrower and drier, revealing more of the whitish-stemmed skeleton of the plant. I don’t find the plant’s appearance particularly attractive in summer, less so indeed than some of the completely bare plants, yet at the same time its resilience is impressive. 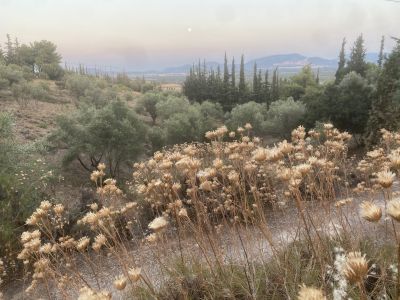 However Lucie Willan reports that some of the old specimens of P. chamaepeuce around the ‘threshing floor’ at Sparoza had begun to fail after the extremely hot summer of 2021, only to be finished off by the weight of the snow in early March this year.
The pinkish-purple thistle-like flowers of this plant in spring produce plentiful seed and it self-sows profusely. Thus the progeny of the plants that had to be removed live on, eventually to replace them. 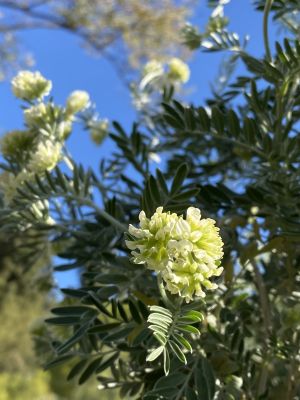 Anthyllis barba-jovis, Jupiter’s beard, has creamy-white clover-like flowers and composite silvery leaves consisting of many leaflets. It grows woodily to a height of two metres or more and is native to many countries of the Mediterranean Basin. In summer its leaves shrink, making the plant look much sparser. 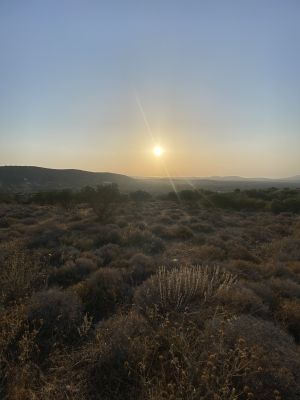 Indeed, for many gardeners, especially perhaps those who have recently moved to the Mediterranean from more northern countries, the fact that some plants lose all their leaves when they enter into summer dormancy may seem awkward. At first glance they look dead. Yet the mediterranean climate is itself one of dramatic contrasts and, carefully positioned in a mixed drought-tolerant planting, these bare plants have a role to play. Change is part of a garden – and what could be more dramatic a change than when these plants suddenly and exuberantly burst into leaf in autumn, full of the force of life? And after all, even the gardener needs a rest in the heat of summer.