A Garden on Ithaca

Maurice Schilliger writes: The Ionian Islands have their own specific climate within that of the other Greek islands. It can be very wet in winter (we had 70cm of water in three days in October 2021) and dreadfully dry in summer (when you look at your plants, I mean).

The island of Ithaca, as well as her big sister Kefalonia, is rich in large and beautiful gardens, built from nothing, while my own garden remains a humble and laborious place. Nevertheless I often have visitors (who come mainly for the view) as the place has a charm that we couldn’t have created – we can simply go with it and let it inspire us. 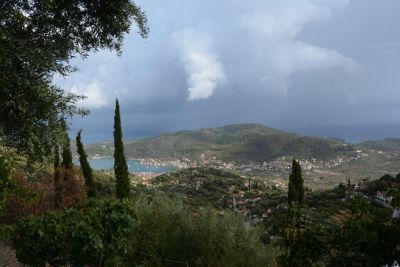 View from the garden

My location, overhanging the village of Perachori, has a north-east orientation - sunrise and moonrise - just below one of the last forests of holm oak (Quercus ilex) surviving on these islands. The view is breathtaking: the village tumbling down to the basin of the port surrounded by hills and cliffs, then the sea with some islands in its blue, then the mainland opposite, its mountains white with snow as I write. 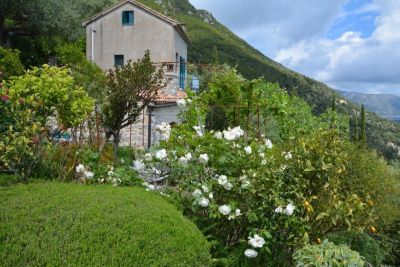 The forest of holm oak (Quercus ilex) above the garden

In summer I enjoy the shade given in the afternoon by the trees and the hill; the garden is resting after a morning that starts as if under a flame-thrower just after sunrise. In winter however we have no strong sun at all; it is very damp and full of beautiful weeds that would overwhelm the garden if I wasn’t careful, as well as cyclamens, orchids, violets and many different kinds of horta, the name given here to various species of edible wild greens. 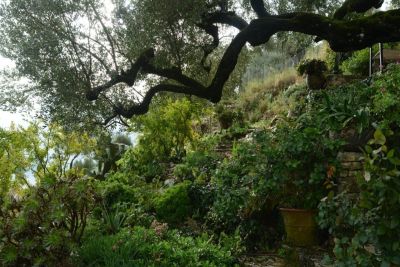 Garden cool under the trees

It is about 20 years since I bought this house in Ithaca with a small (about 1000m2) garden. A lot of well-shaped stone blocks, coming from houses that had collapsed, helped me to repair and build many terraces which had the effect of making the garden feel double its size. In fact since I began living permanently on the island I really did double its size two years ago by buying an old garden next to mine, and I then quadrupled it by buying an olive orchard and some ruins just above my land.

The island of Ithaca is simply a block of limestone melting into the sea and perforated by the action of rain till it resembles a Swiss cheese. As a result there are no springs, wells give brackish water, and rather suspect piped water comes from a desalination plant. Traditionally rainwater collected during winter is stored in a cistern, either deeply excavated in the rock or constructed in concrete on the hill; this provides enough for sparing watering in summer. I have a few such cisterns, with a capacity of 8 to 15 cubic metres, but I also buy in quite a lot of water from the district. 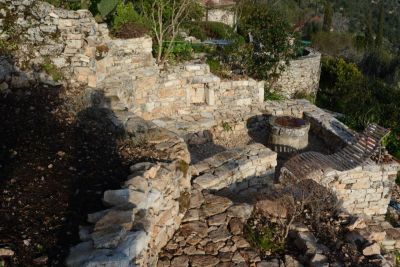 In the original part of my Ithaca garden the choice of plants was dictated by the desire to create an atmosphere of summer and holidays – the garden in the South that we could all dream of. In addition to the large olive trees that already embraced the place, I started with agaves, aloes, cacti and Opuntia, all kinds of citrus trees including kumquats and grapefruit, as well as pomegranates, capers which have formed shrubs over the years, jasmines and honeysuckles for their perfume, roses including a white Banksia rose, Rosa ‘Mutabilis’ and Rosa sempervirens, which I found growing wild on the island and which makes vines 12 metres high if it finds the right support. Many of these new introductions came from cuttings gleaned on the island or when travelling in the region. 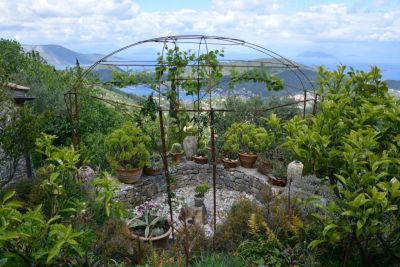 To reduce the prominence of stone in the walls and terraces I planted prostrate rosemary that covered the walls with its blueish waterfalls by rooting at each ‘landing’, the Jacobaea maritima found on the cliffs of the island which, unlike the cultivar, has a green leaf surface with downy white undersides and makes an incredible overhanging bush, and also an ivy cultivar (Hedera helix var. deltoidea) with slightly leathery heart-shaped leaves that works perfectly in the atmosphere of old walls with white-flowered Vinca minor and blue Vinca major ‘Variegata’ which brightens it all with its golden garlands. 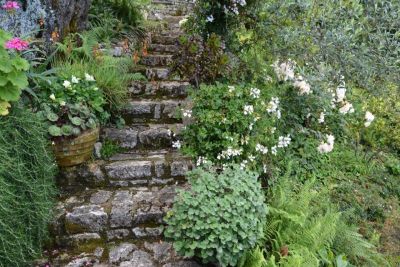 Steps with planting into the stonework 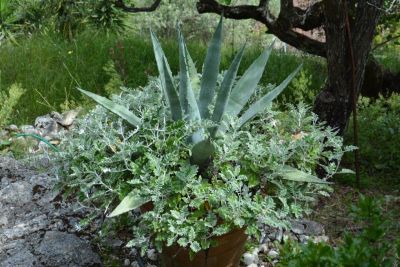 The new part of the garden will be more dedicated to the winter season. First, in the ruins of the old house is an herb and vegetable garden. I then started to plant many species that bloom in the wet time of year, such as bulbs, corms and rhizome. I already had a lot of Narcissus, Gladiolus and Chasmanthe, as well as masses of the scented white Iris albicans (a sterile hybrid, one of the oldest iris hybrids) which blooms from January to the end of May. 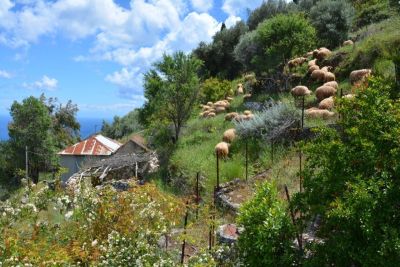 I am introducing lilies, tulips, crocuses including the saffron crocus, fritillaries, freesias, amaryllis, etc. I am also starting to plant quite a lot of rose trees of different kinds. The aim is to have winter and spring flowering and to let the plants dry out in summer as they do in the village; some have survived for years in old gardens without a drop of water in summer and they will sometimes keep blooming all winter long. 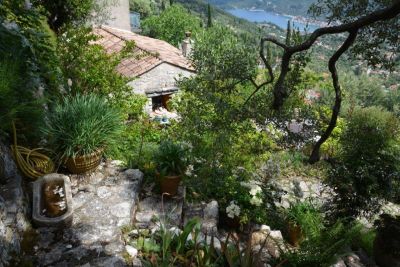 Looking down the garden steps 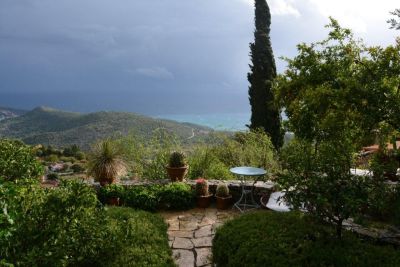 View from a terrace after rain

It is difficult to explain the choice of plants we invite into our gardens: eclectic, systematic, anarchic… For me the choice is dictated by many memories of my childhood, for example the first time I crossed the Alps and saw the Borromean Islands on Lake Maggiore… I could see plants growing like a jungle which until then I’d known only as little things in pots. Born into a family of horticulturists, there are many plants that I no longer see. But just as our ancestors painted in their caves all the representations of desire and fear, I put in my garden the colours, the smells and perfumes, the medicinal plants and aromatics, the fruits of the Garden of Eden, the souvenirs of initiatory paths and some of those little things, as if to tame them.